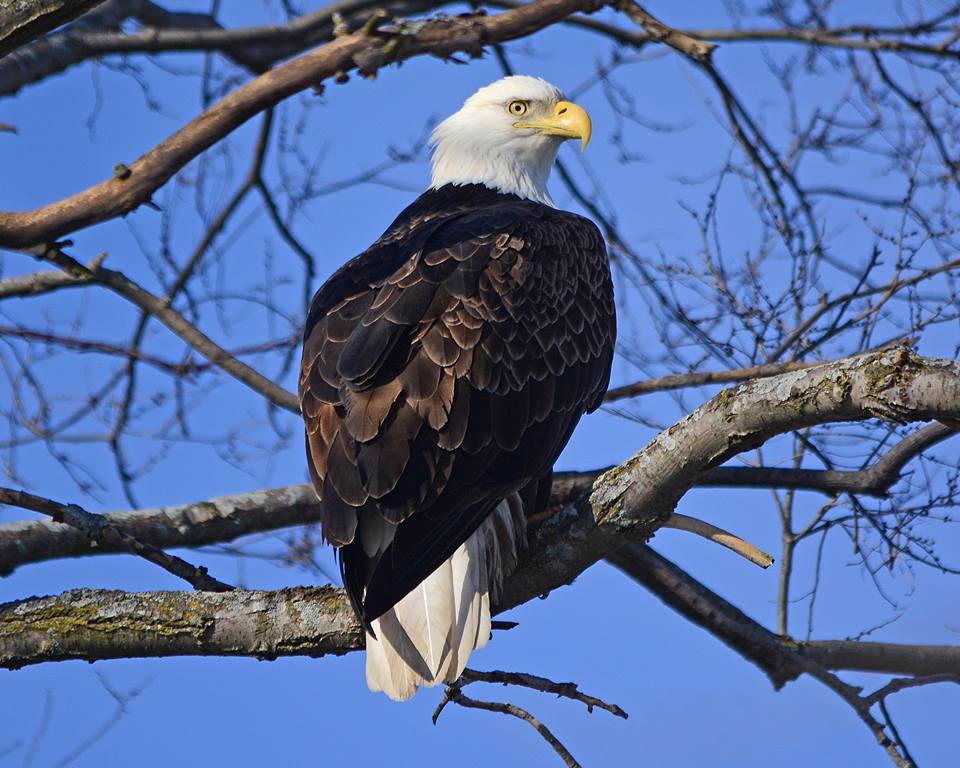 Christopher Cudworth, in an informative article on the bald eagles of the Fox River for the City of Batavia's "Batavia Plus" blog, writes:

How things have changed.

In 2018, there are dozens of bald eagles to be found along the Illinois stretch of the Fox River...  The species now breeds in multiple locations with massive nests built of large sticks perched in tall trees.

Followers of the #EnjoyAurora blog will know from our interview with local photographer Bill Peterson that eagles are in abundance on and along the Fox River today. You can view bald eagles from any of the communities in our service area, but especially in the towns that straddle the Fox River, including (from north to south) Batavia, North Aurora, Aurora, Montgomery, Plano, and Yorkville. To celebrate the migration of our winged visitors, and to encourage you to get out and do some bald eagle spotting of your own, we're providing this handy itinerary to touring the Fox River in the winter months with suggestions on where to eat, drink, play, and stay while you visit.

The Fox River is the central feature of charming, historic downtown Batavia, Illinois, where you can spot bald eagles as they soar over the tops of limestone buildings and a photogenic railroad truss bridge that's been repurposed to connect pedestrians and cyclists touring the East and West branches of the Fox River Trail. Fermilab's natural areas is another great spot for birdwatching, covering over 6,800 acres of pristine prairie and home to a herd of American bison, quite popular with visitors to the area.

Pair your visit to Batavia with stops at:

Make a visit to Mooseheart, where a long established eagle nesting place has been a favorite sight among locals traveling Route 31 between Batavia and North Aurora. On the east side of the Fox River, Red Oak Nature Center and its adjoining parks have been known to be favored haunts of migrating bald eagles scouting for their daily meals. Scenic views from downtown North Aurora are available at Riverfront Park, where you can spot eagles from the comfort of your car or hike around this beautiful Fox River destination.

Pair your visit to North Aurora with:

The second-biggest city in the state, Aurora, Illinois is home to an award winning Broadway Series at the Paramount Theatre and an extraordinary new outdoor concert venue at RiverEdge Park, as well as Vegas style gaming at the Hollywood Casino Aurora and destination shopping at Chicago Premium Outlets and Fox Valley Mall. The Fox River runs through Downtown Aurora, creating picturesque views in and around historic Stolp Island and along the river's banks north and south of the city center.

Plan your visit to Aurora with:

Some of the most photogenic spots on and along the Fox River can be found in Montgomery, Illinois. Enjoy wraparound views of the river, Fox River Trails, and a quaint historic district where locals and visitors congregate for food and drink year round.

The Village of Oswego was founded by its earliest settlers at what is now known as Hudson Crossing Park, where a smooth, shallow limestone shelf allowed safe passage by foot over the Fox River. Oswego is now home to an eclectic mix of breweries and craft beer bars, hip boutiques in its downtown shopping district, and scenic natural areas where eagles can be spotted in abundance.

Follow the bend of the Fox River as it winds south and banks west into Yorkville, where prime eagle spotting can be found at Silver Springs State Park Fish & Wildlife Area. From Silver Springs, you'll also have unfettered views of the Farnsworth House, a mid-century masterpiece and icon of American artchitecture. Return back to the gem of Yorkville's parks, Bicentennial Riverfront Park in downtown Yorkville, and you'll find plenty to see, drink, eat, and do along the way.