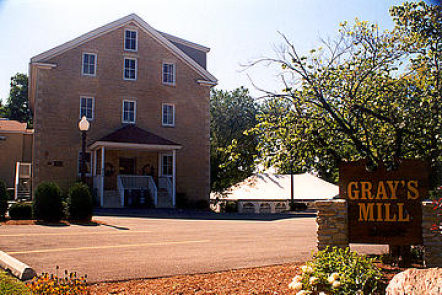 The Gray-Watkins Mill or Gray’s Mill was an early turbine mill that was later used by an automobile parts manufacturer and currently the home of award-winning South Moon BBQ. Built in 1853 its original purpose was as a water-powered turbine flour mill on the Fox River. It operated by water power until 1916 and then by electric power until 1922. The mill is rectangular in shape, with an asphalt shingle gable roof. It stands four stories tall (plus loft) and is supported with 15 columns per floor. The main entrance on the west side features a concrete dock. An oak board porch with a wood shake roof was added on top of this dock. Additional doors are found on the north and east sides. The building has 43 windows, most of them 6’ x 4’. A storage unit beneath a dormer houses supplies and machinery for the elevator, which is no longer in use. Inside, the main staircase was altered to comply with modern building codes and a wrought iron bannister was added. The interior walls were originally stone, but were covered with cement and plaster some time during its manufacturing years. During the 1976 restoration, new light fixtures, insulation, drywall, and furring were added. The main level features a beautiful Cherrywood floor. Listed on the National Register of Historic Places in 1979.