Home > Outdoor Adventure on the Fox River in Aurora

Outdoor Adventure on the Fox River in Aurora 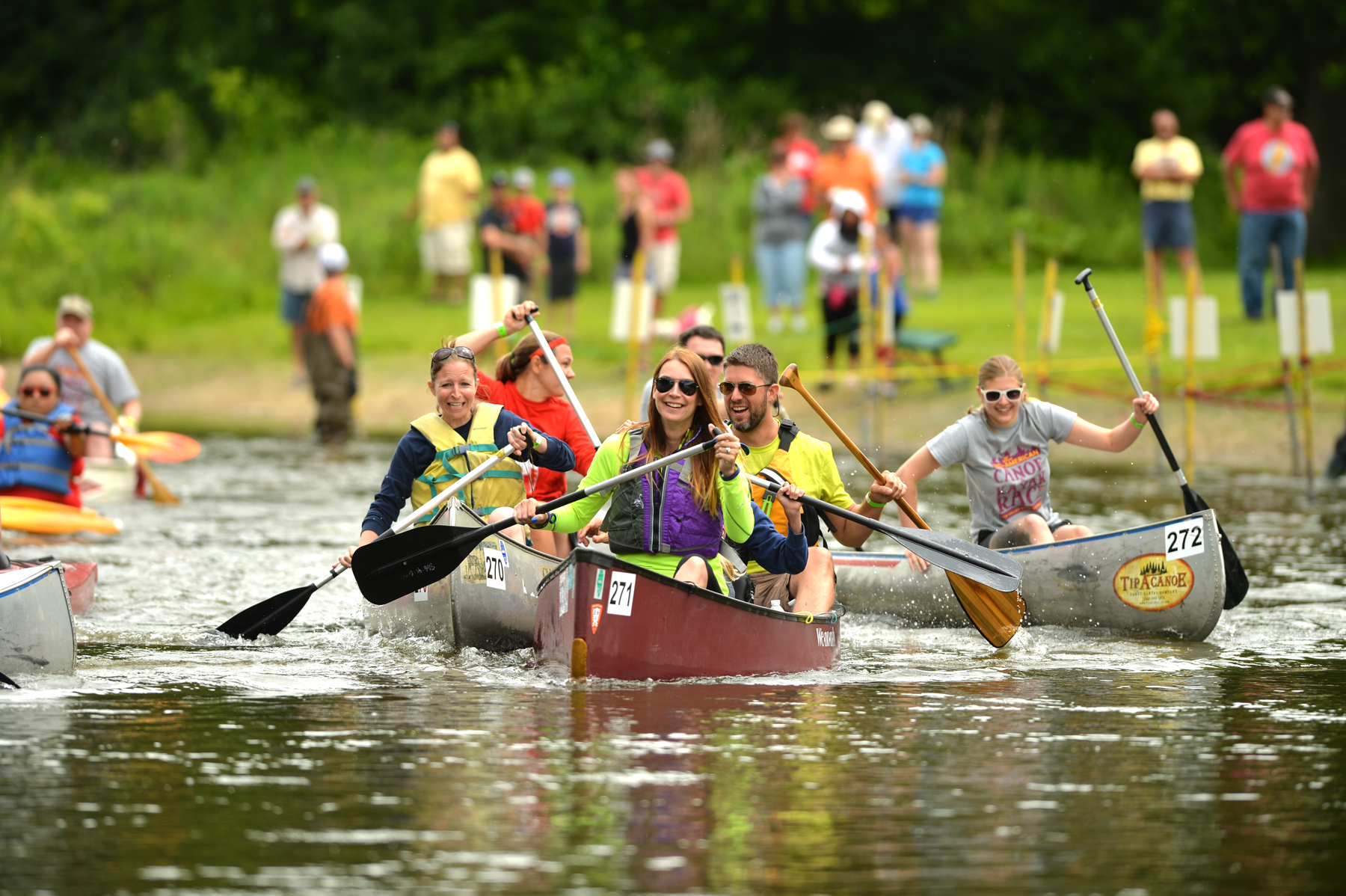 Want to get away with friends for a weekend of outdoor recreation and Chicago-area culture? Better yet, do you want to get away for a weekend to a destination where there’s no car required? Then consider a weekend trip to the Aurora Area in the Fox River Valley of Illinois, home to an impressive collection of notable architecture, historic buildings and destinations for outdoor activities from kayaking to cycling.

Because of the wealth of bike trails in the Aurora area, it’s easy to plan a weekend getaway where you can travel from place to place by bike. Plus, getting to Aurora by public transportation is quick and easy— it’s only a little over an hour to Aurora from Chicago’s Union Station on Metra’s BNSF Railway. So block out an upcoming weekend on your calendar, grab your bikes, board the train and begin a green weekend getaway in Aurora. Here are some of the top things to do in Aurora on a weekend getaway—all easily accessible by bike or paddle.

“Aurora is a great place to play outdoors due to our close proximity to the Fox River as well as many parks on and around the Fox River Trail and the Illinois Prairie Path,” says Jake Wolfe, Aurora store manager for Rocktown Adventures, an outdoor retailer where you can rent or purchase supplies like bikes, kayaks and tents. The network of trails along the river and the Prairie Path are great for cycling, which is what makes the Aurora area a smart place to play outdoors, especially if you want to reduce your carbon footprint. In fact, the League of American Bicyclists has designated Aurora a bicycle-friendly community due to its network of great trails as well as a local bike-sharing program.

Aurora is a great entry point for a number of Fox River Valley bike trails, including the Fox River Trail. The Fox Valley Park District has created 48 miles of interconnected biking, hiking and walking trails in the Aurora area. “Many trails in this area that were never linked before are now linked,” says Pete Cleary, general manager for the Aurora and Batavia locations of All Spoked Up Bike Shop, a local go-to for bicycle repairs, purchases, rentals and tips for navigating the area.

The Fox River Trail is Cleary’s favorite area bike path. It’s paved, and runs from just south of Aurora to Wisconsin, following the natural path of the Fox River. It’s the perfect starting point on a green getaway in Aurora. After arriving via Metra, you can easily reach the trailhead of the Fox River Trail, from Galena Blvd., near the river. And your adventure begins. 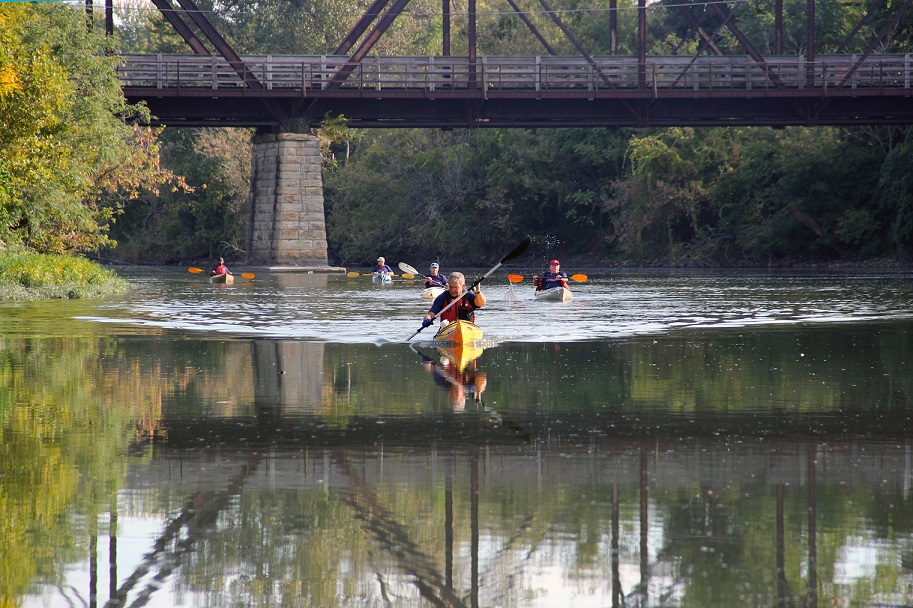 Top Stops As You Venture Out

The Fox River Trail leads to a number of great Aurora area attractions as you venture outside of Downtown Aurora proper, starting with Red Oak Nature Center near North Aurora, only three miles and about 20 minutes from the trailhead. The nature center is home to a hands-on educational exhibit called “Sense the Seasons,” and the facility is surrounded by 40 lush acres of forest and wildlife habitat.

Further north in Batavia, you can veer off the Fox River Trail and experience more biking and nature opportunities along trails in Lippold Park and Glenwood Park. Elsewhere, the Batavia Riverwalk has beautiful views of the Batavia Depot Pond (a popular ice skating spot during the winter) and the Fox River. 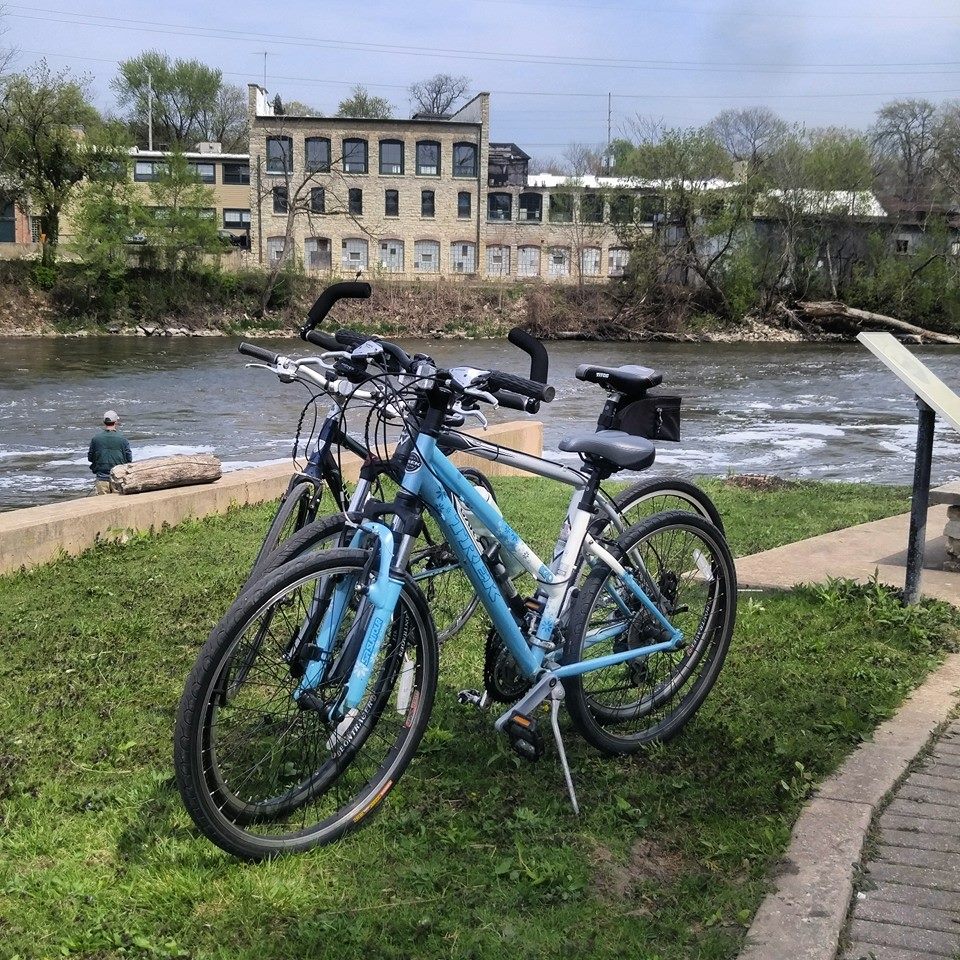 Also in Batavia, Fermilab Natural Areas are accessible by the Fox River Trail, but can be accessed more quickly and easily via the Illinois Prairie Path Batavia Spur (about a 20-minute ride from the paths along the Fox River to Fermilab to the east). This preserve provides an environmental science program designed to restore, manage, and conserve nature. Open year-round, Fermilab offers over 6,000 acres of natural areas to explore where you can witness a bison herd and stake out excellent birdwatching opportunities. Fermilab is home to nearly 300 different native and migratory bird species.

When you arrive back in Aurora, plan to spend some time exploring downtown by bike, where it’s easy to reach local restaurants, pubs and entertainment venues. Wolfe of Rocktown Adventures says one of his favorite things to do is see live music at RiverEdge Park on the Fox River.

RiverEdge Park is Chicagoland’s newest outdoor concert venue. It hosts Blues on the Fox each June featuring national blues artists. A full season of big name and regional bands, as well as special events take place at the venue throughout the summer, so check the calendar to see if you can organize a green getaway during a show you’d love to see.

Speaking of Two Brothers Roundhouse, locals say, “You have to go there” when you say you’re visiting Aurora. Located adjacent to the Metra station and across the street from RiverEdge Park, the restaurant and bar is housed in a railroad roundhouse—the oldest limestone roundhouse in the country, in fact—at 205 N. Broadway. It’s listed on the National Register of Historic Places, and was named one of the 17 best bars in the Chicago Suburbs by Thrillist Chicago. Part gastropub, part sports tavern, part perfect place to drink a beer on an outdoor patio, Two Brothers Roundhouse serves great food and handcrafted Two Brothers artisan brews that have become a staple in Chicagoland. A music venue too, it favors talented local recording artists and plays host to a weekly comedy showcase featuring the best and brightest of the Chicago comedy scene. There’s even a café and on-site bakery, and the new Two Brothers Artisan Spirits distillery offers weekend tours where you can go behind the scenes and sample the craft liquors made on-site. 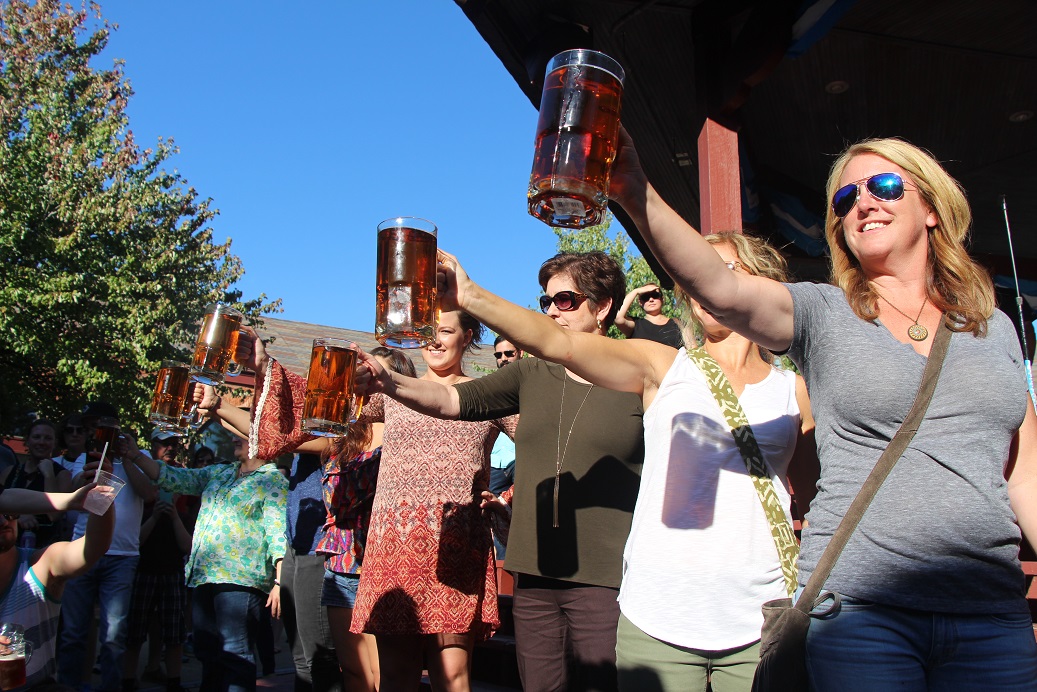 Elsewhere in Aurora, you could stop by the recently opened Gillerson’s Grubbery, with a scratch kitchen featuring locally sourced ingredients and a curated selection of Chicagoland’s best craft beers. It’s less than a mile from Two Brothers Roundhouse and Aurora’s transportation hub. In addition, you can bike to several Aurora entertainment venues. See a show at the beautifully restored Paramount Theatre, near the train station. An historic former cinema, the Paramount is listed on the National Register of Historic Places and was named among the top 10 theatres in the Chicago area by the League of Chicago Theatres. Paramount’s annual Broadway series continues to earn rave reviews and equity “Jeff” awards for excellence in Chicago theater. The Paramount Theatre brought over 325,000 audience members through its doors last year and holds the second-highest subscriber base of any theater in the country.

For overnight accommodations, Stay at the new Holiday Inn Express & Suites Aurora-Naperville, neighboring Two Brothers Roundhouse and the Aurora Transportation Center, if you’re looking for convenience. You can park your bike for the evening and walk to Paramount Theatre and RiverEdge Park from there.

After a good night’s sleep, get back on your bike and head in a different direction. Running west off the Fox River Trail, the scenic 11.2-mile Virgil L. Gilman Trail leads to Waubonsee Community College Sugar Grove Campus. It crosses a covered bridge, two abandoned railroad right-of-ways and the gentle drift of Waubonsee Creek. Constructed by the Kane County Forest Preserve District and the Fox Valley Park District, this is a great place to spot ducks, downy woodpeckers plus other birds, as well as native prairie and many tree varieties. Without stops you can reach the end of the trail, from Aurora, in about an hour.

But the Virgil L. Gilman Trail leads past several destinations that are worth visiting. Blackberry Farm & Splash County is a 54-acre family-friendly spot with unique play areas and live animals, amusement rides and a living history museum. Featuring more than 40 acres of native woodland shrubs and a wet soil valley, Aurora West Forest Preserve lies near the farm. 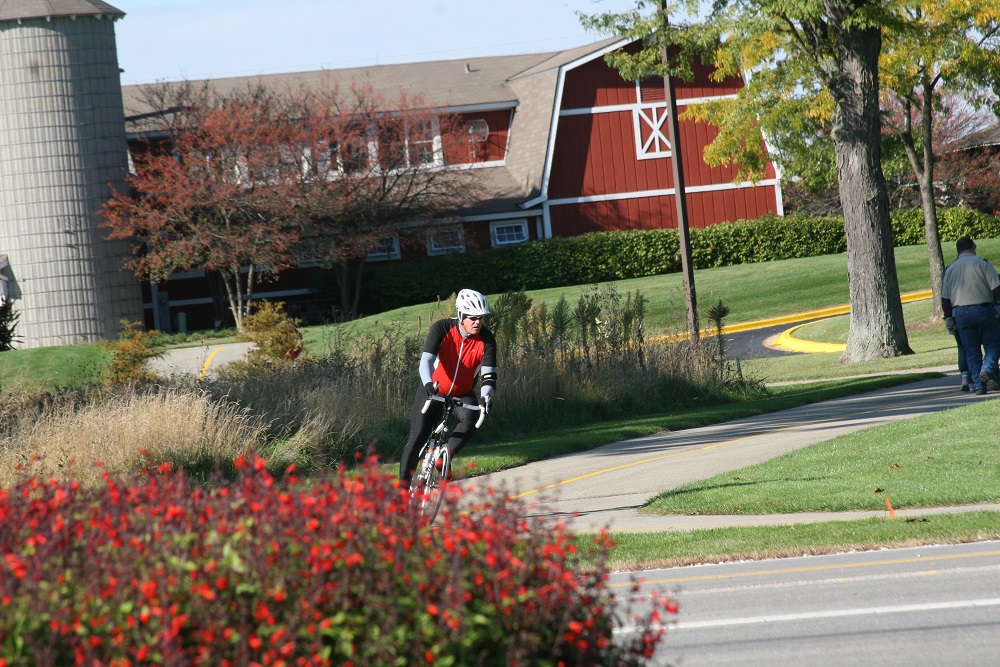 Your weekend biking escape to Aurora can be customized to include other places to go and things to do, too. Looking for more outdoor activities? Play some golf or see wild birds at the zoo, in Phillips Park, a little more than two miles from the Metra station, in Aurora.

And when you’re hungry, check out a few other options in the area. Our website provides many local dining option at your fingertips with easy to navigate mapping and contact information.

Aurora has always been a popular weekend getaway destination outside Chicago for a Paramount show, live music concert or fun foodie weekend. But it’s also an ideal place to escape for the weekend, explore outdoors and leave your car behind. Start planning your cycling getaway to Aurora, Illinois, today.