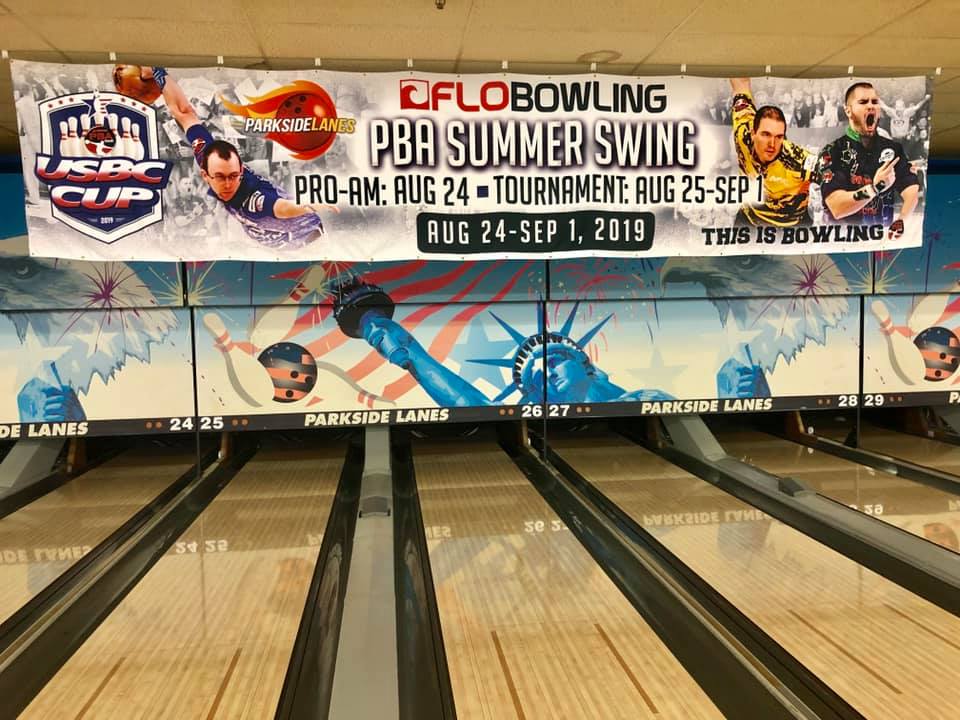 The FloBowling PBA Summer Swing, presented by the Brands of Ebonite International, will be livestreamed in its entirety by the PBA’s online streaming partner, FloBowling, which made its debut in Aurora in 2018. The tournament program has again been orchestrated by 13-time PBA Tour champion Sean Rash, an Aurora area resident.

The Summer Swing – a part of the 2019 Go Bowling! PBA Tour – will include the PBA Wolf, Bear and Illinois Open title events, each presenting a distinct lane conditioning challenge.

The Wolf Open will be contested on the PBA Wolf 32 oiling pattern featuring a 32-foot application of oil. The Wolf Open will include 14 qualifying games Monday and Tuesday, Aug. 26-27, plus a six-game cashers round for the top 18 cashers. The top five after 20 games will advance to the stepladder finals on Tuesday at 8:30 p.m. CT. Two-hander Anthony Simonsen of Little Elm, Texas, is defending champion.

The same format will apply to the PBA Bear Open Wednesday and Thursday, Aug. 28-29, except the players will bowl on the PBA Bear 41 oiling pattern. The FloBowling stepladder finals will be held on Thursday at 8:30 p.m. EJ Tackett of Bluffton, Indiana, won the 2018 Bear Open title.

The Summer Swing concludes with the PBA Illinois Open on Friday and Saturday, Aug. 30-31, featuring the top 24 players based on 28 combined games of Wolf and Bear qualifying totals. Those 24 will bowl three eight-game round-robin match play rounds with 52-game pinfall totals deciding the top five for the Illinois Open stepladder finals at 3:30 p.m. Saturday. The challenge in the Illinois Open involves coping with the Wolf 32 pattern on one lane and the Bear 41 on the other. England’s Stuart Williams won the 2018 Tulsa Open, an almost identical event held in Oklahoma.

In addition to titles in each event, the Wolf, Bear and Illinois Open tournaments – the seventh, eighth and final events in the nine-event Summer Tour – will award competition points that will decide the five players who will earn bonus cash in the USBC Cup series ($20,000 first place), the eight players who will receive invitations to participate in the inaugural FloBowling ATX Invite at Dart Bowl in FloBowling’s home city, Austin, Texas, on Saturday, Sept. 21 ($25,000 first prize) , and the eight bowlers who will win expenses-paid trips to participate in the PBA China Tiger Cup, Nov. 19-21, in Shanghai ($20,000 first prize). Fans can follow the points races throughout the summer at this link: https://www.pba.com/SeasonStats/PointsLists/132.

If titles, points and prize money aren’t enough, don’t forget the Aurora series may also play a key role in the 2019 PBA Player and Rookie of the Year races.

PBA stars entered: The PBA Summer Swing has attracted a world-class field of PBA stars from around the world, including three Hall of Famers and a host of PBA Tour champions and rising stars who are beginning to build their careers.

Heading the list of players is four-time PBA Player of the Year Jason Belmonte of Australia. After winning the PBA World Championship title for a record 11th career PBA major title earlier this season, Belmonte, who uses the revolutionary two-handed delivery, is a leading contender this season for his fifth Player of the Year honor.

Among the other PBA champions competing are tournament host and 13-time PBA Tour titlist Sean Rash of nearby Montgomery who has been instrumental in bringing the PBA back to suburban Chicago. Also of local interest is Kris Prather of Plainfield who was the winner of the inaugural PBA Playoffs earlier this summer in Portland, Maine, and AJ Johnson of Oswego who is trying for his first PBA Tour title.

Among the PBA Hall of Famers scheduled to compete is Norm Duke, who ranks third on the all-time PBA Tour titles list with 40 wins. Earlier this season the 55-year-old Duke won the Indianapolis and Jonesboro Opens to become the oldest player to win back-to-back PBA Tour events.

Also scheduled to compete will be the ageless bowling legend Carmen Salvino of Schaumburg. At 85, the PBA Hall of Famer and 17-time PBA Tour champion is the oldest player to compete in a PBA Tour event.

For continuing information about these and other PBA events, follow the PBA on pba.com and PBA’s home pages on Facebook, Twitter and Instagram. For FloBowling subscriptions, visit FloBowling.com. Additional Summer Swing information can also be obtained by calling Parkside Lanes at (630) 898-5678.

Top 18 after 14 games advance to Wolf Open cashers round