Home > Hand to God, next in Paramount's Bold Series, opens May 25th at Copley Theatre

Hand to God, next in Paramount's Bold Series, opens May 25th at Copley Theatre 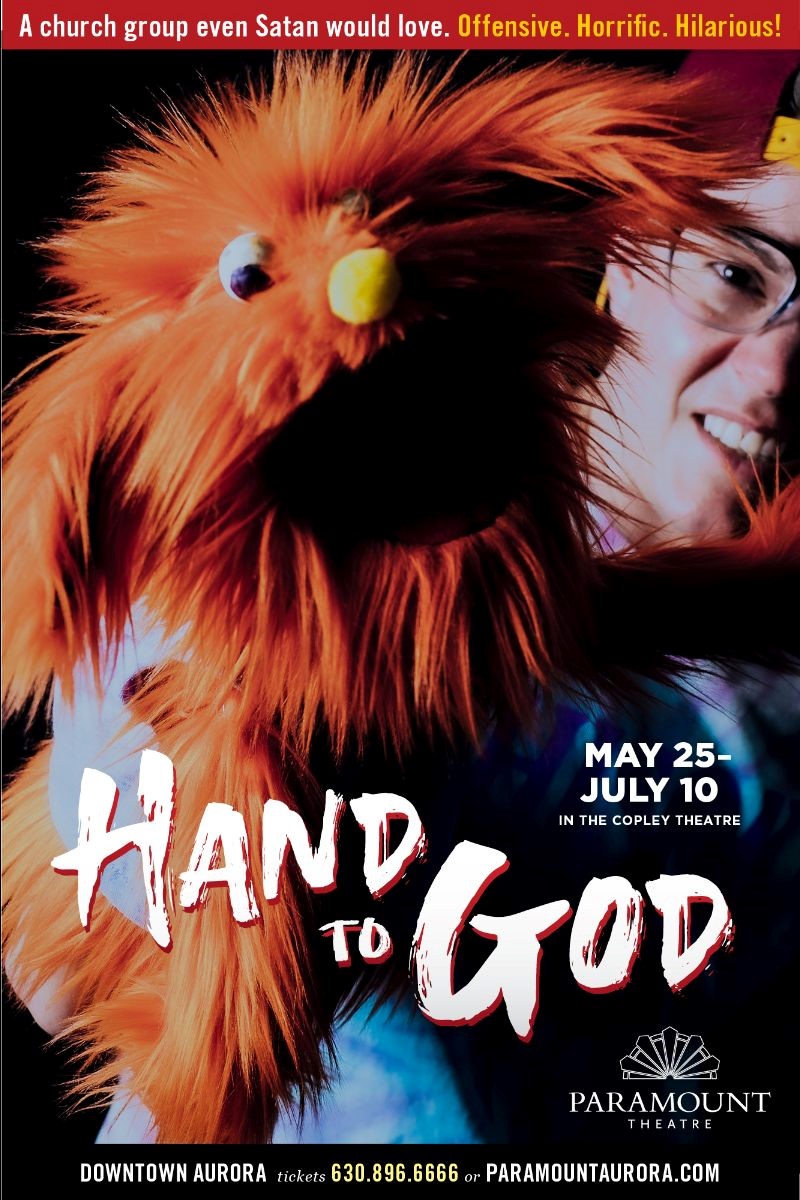 Everybody loves puppets! Even puppets that may or may not be possessed by Satan. Right? 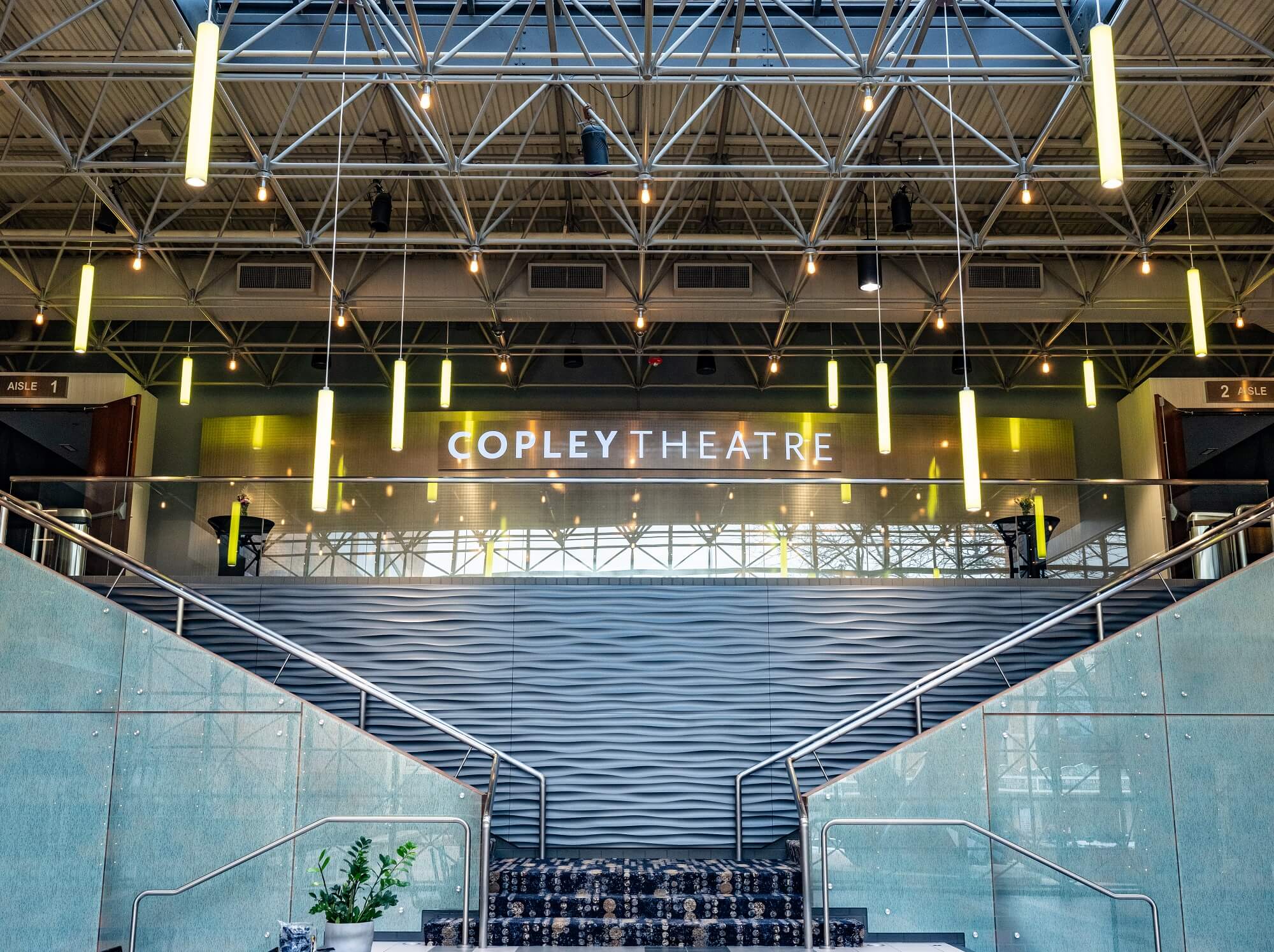 Sock it to me: Behind-the scenes of Paramount’s BOLD Series production, Hand to God

A small church ministry therapy group in Texas is the unlikely setting for Hand to God, a darkly humorous horror shocker guaranteed to leave your sides sore from laughter and your face soaked in tears. Brilliantly written by Richard Askins, Hand to God creates a funny, striking and poignant exploration of the deeply human journey of loss and the demons (both mythical and subliminal) that accompany the voyage. If God works in mysterious ways, wait until you see what Satan has up his, or at the end of your, sleeve.

Paramount’s cast for Hand to God features August Forman as Jason/Tyrone, with Adam Wesley Brown as Pastor Greg, Jordan Moore as Timmy, Felicia Oduh as Jessica, and Monica West as Margery. All are making their Paramount debut except Brown, who performed a memorable turn as Carl Perkins in Paramount’s 2017 Broadway production of Million Dollar Quartet.

Trent Stork, Associate Artistic Producer and Casting Director at Paramount, directs. Stork made their Paramount directing debut in 2018 at the helm of Legally Blonde (Broadwayworld.com Award – Best Direction of a Musical), followed by Paramount’s 2021-22, smash hit season opener, Kinky Boots. They have worked on the directing team for 19 productions at Paramount, 13 of those alongside Artistic Director Jim Corti. Outside of Paramount, Stork has worked at the Kaufman Center in New York City, Actors Theatre of Louisville, Angels Theatre Company and The Nebraska Repertory Theatre, among others. They also started their own casting company, Trent Stork Casting, and was the Chicago casting director for the new West Side Story adaptation, directed by Steven Spielberg.

Robert Askins (playwright) was born in Cypress, Texas in 1980. He moved to New York in 2005. His play Hand to God was first produced off Broadway in 2011 and 2014, then on Broadway in 2015, the latter receiving five Tony Awards nominations, including for Best New Play. The New York Times wrote “Askins’ darkly delightful play really inspires goose bumps as he unleashes a reign of terror…But he’s also flat-out hilarious, spewing forth acid comedy that will turn those goose bumps into guffaws.” Askins’s other plays include The Squirrels, Permission, Princes of Waco, Matthew and the Pastor’s Wife and The Love Song of the Albanian Sous Chef. Askins is an alumnus of I-73, Youngblood, and a member of The Ensemble Studio Theatre. He has received two E.S.T./Sloan grants, an Arch and Bruce Davis Award and the Helen Merrill Award for emerging playwrights.

The Copley Theatre is located at 8 E. Galena Blvd., in the North Island Center, directly across the street from Paramount Theatre in downtown Aurora. For tickets and information, visit paramountaurora.com, call (630) 896-6666, or stop by the Paramount box office, 23 E. Galena Blvd., Monday through Saturday, 10 a.m. to 6 p.m. Note: Hand to God is suggested for ages 18 and up due to strong adult language, sexual harassment, simulated sex and simulated sexual violence.

Pay What You Can performances

In order to break down barriers to experiencing live theater, Copley Theatre will offer two Pay What You Can performances of Hand to God: Thursday, May 26 at 7 p.m., and Saturday, May 28 at 2 p.m.

Both days, starting at 10 a.m., visit the Paramount Theatre box office, 23 E. Galena Blvd. in-person to request tickets. Customers will be asked how much they’d like to pay and will simply pay what they can. Limit four tickets per person. Offer not valid toward previous purchases. Online or phone purchases are not permitted. The Pay What You Can initiative is part of Paramount’s new program, REACH (Resources Expanding the Arts and Connecting Humanity).

Paramount will offer an open and closed captioning performance on Wednesday, May 25 at 7 p.m.