The Aurora Area CVB caught up with Kevin Trudo, Cafe Manager at Two Brothers Roundhouse, to talk about the re-opening of the Roundhouse Cafe and the distinct identities of coffee shops and cafes in downtown Aurora, Illinois.

For such an easygoing person, Kevin Trudo might be Aurora’s most highly-caffeinated individual. Trudo is the manager of the Cafe at Two Brothers Roundhouse, which re-opened this week with a new look and expanded breakfast menu after having been shut down by the pandemic. In the interim, Trudo was a familiar face at cafes in downtown Aurora, and for a while could be found slinging espresso shots at Society 57.

“I left after the pandemic hit and we shut down in March of 2020, and I came back because I love this building and I love this space,” says Trudo about the cafe at Two Brothers Roundhouse. “It’s nice to be back on track, for things to feel a little more dependable than they have been for the last year and a half.”

He points out that the Roundhouse was completed in 1856, pre-dating the incorporation of the City of Aurora by a year. For over a century the Roundhouse served as a transportation hub, with railroad engines turning around in what’s now the Courtyard at Two Brothers Roundhouse.

In the mid-90’s, it was converted into a hospitality venue thanks to an ownership group led by Walter Payton, the legendary Super Bowl winning running back for the Chicago Bears.

In the early 2010’s, Two Brothers Brewing took over and converted the building into an 80,000 square foot entertainment complex, where visitors can enjoy all that Two Brothers offers: artisanal beer, as well as distilled spirits and specialty roasted coffee. 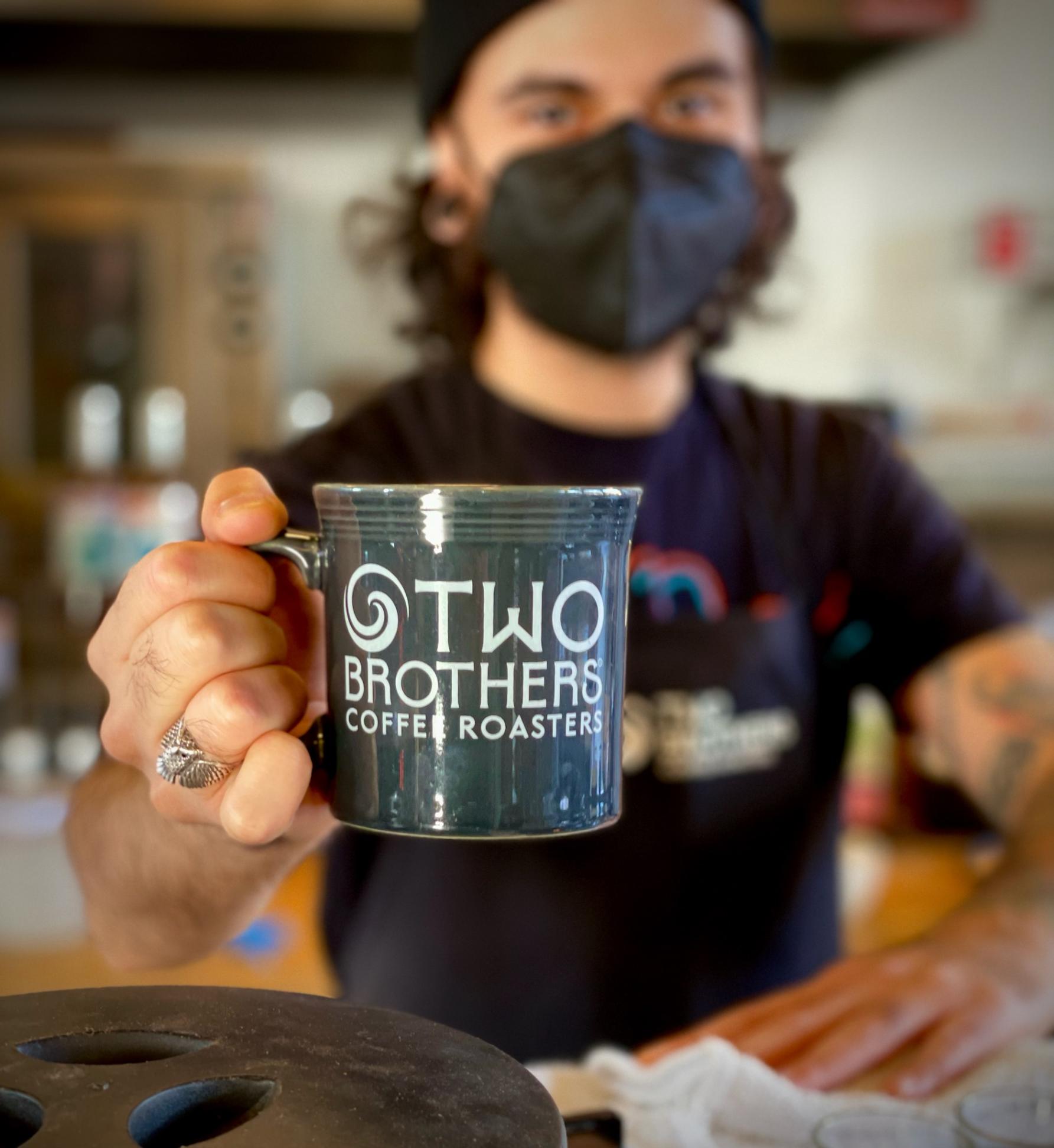 What can visitors expect at the newly re-opened Roundhouse cafe?

“Our main selling point is that we’re huge, we can fit you in,” says Trudo. “Whether you’re here on your own or with a group of 30 or more, there’s space for you to get a great cup of coffee, get some work done, or spend quality time connecting with people.” 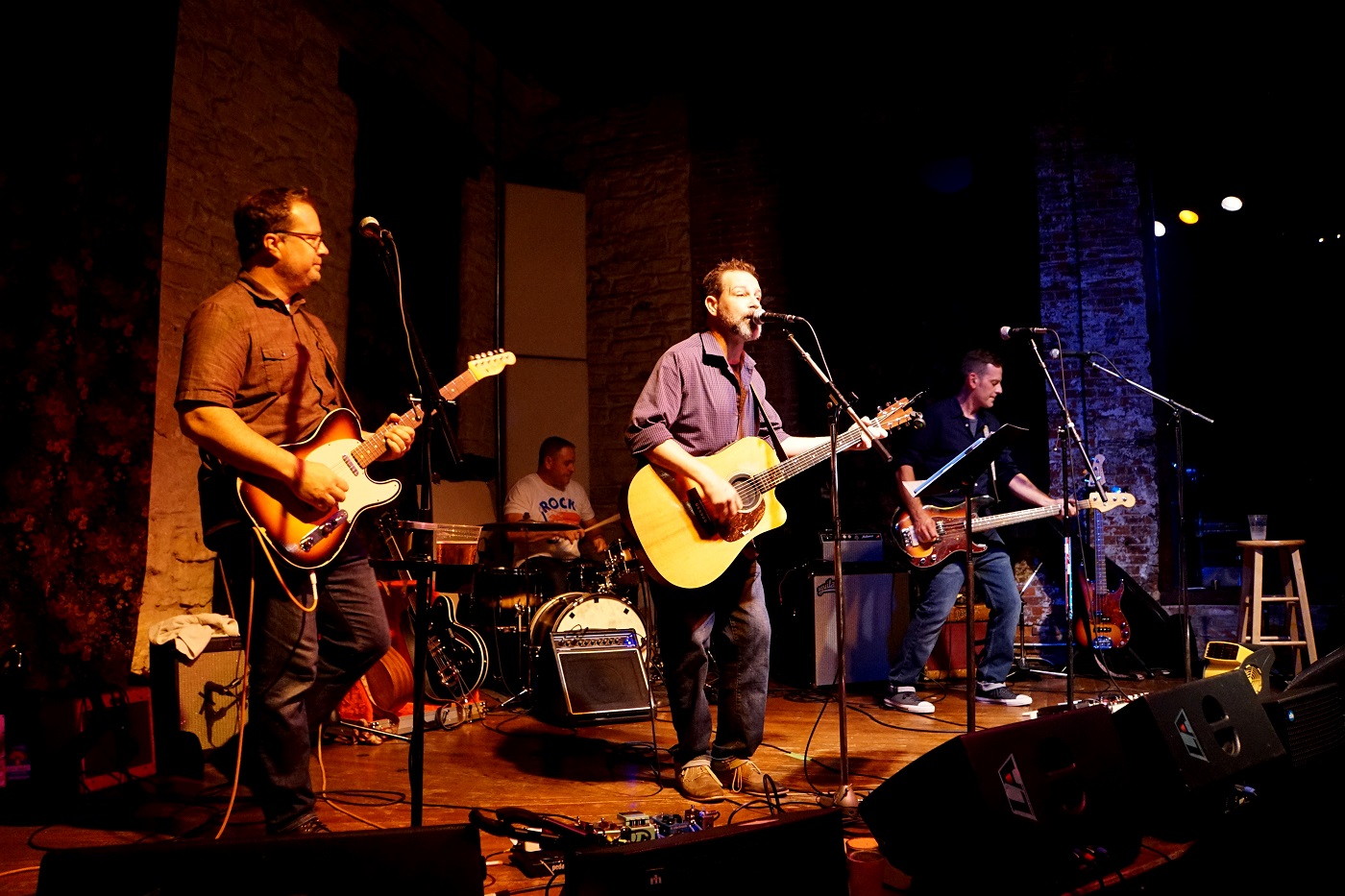 Trudo, center, with band at the Tavern at Two Brothers Roundhouse (Susan May Romano)

The Roundhouse cafe is also a great place to get an adult beverage, with specialty beers brewed at the Roundhouse available on tap, and premium spirits distilled on-site will soon be complemented by what Trudo describes as “a higher end cocktail experience.” The Tavern, a live event space at Two Brothers Roundhouse, offers stand-up comedy, live music, and "Brew & View" events 3 to 4 nights a week. And the new cafe breakfast menu makes the Roundhouse a destination for meals throughout the day.

“The Roundhouse has a very ‘come as you are’ feel to it, like a casual supper club, but everything we do here is excellent by design,” says Trudo. “Our goal is to exceed expectations from the moment you walk through those doors.”

Where to get coffee in downtown Aurora, Illinois

We asked Kevin Trudo, manager of Two Brothers Roundhouse Cafe, to offer visitors and locals alike an insight into the other outstanding cafes in downtown Aurora.

“You have four distinct identities downtown,” Trudo said. “Each of our coffee shops offer something a little different, it’s rare to have that kind of variety.” 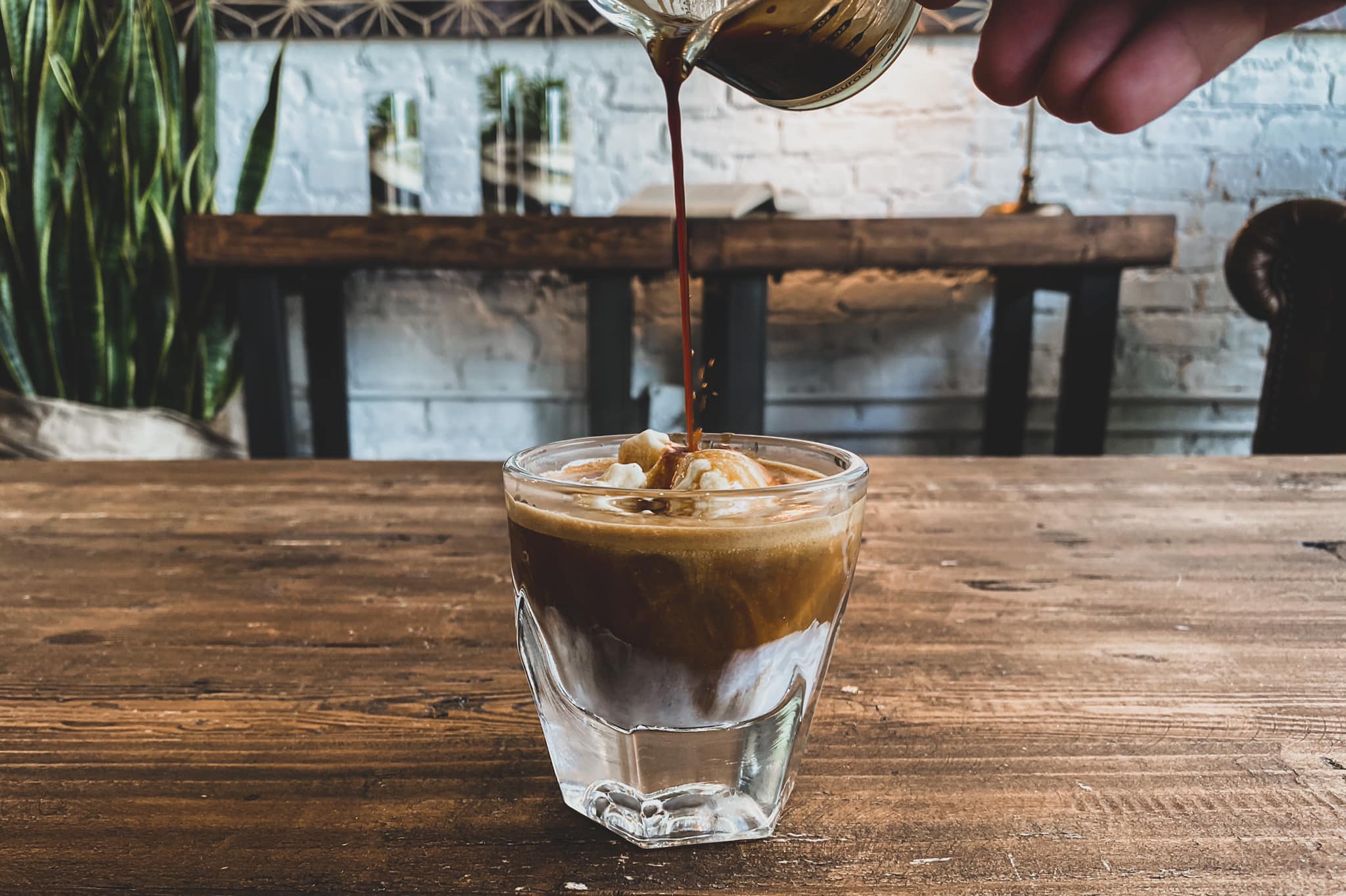 “Luxury in a very approachable way. You never forget that the coffee you’re being served is excellent, that’s the standard, and what sets it apart is how easy they make it look, and how welcome you are when you’re there.” 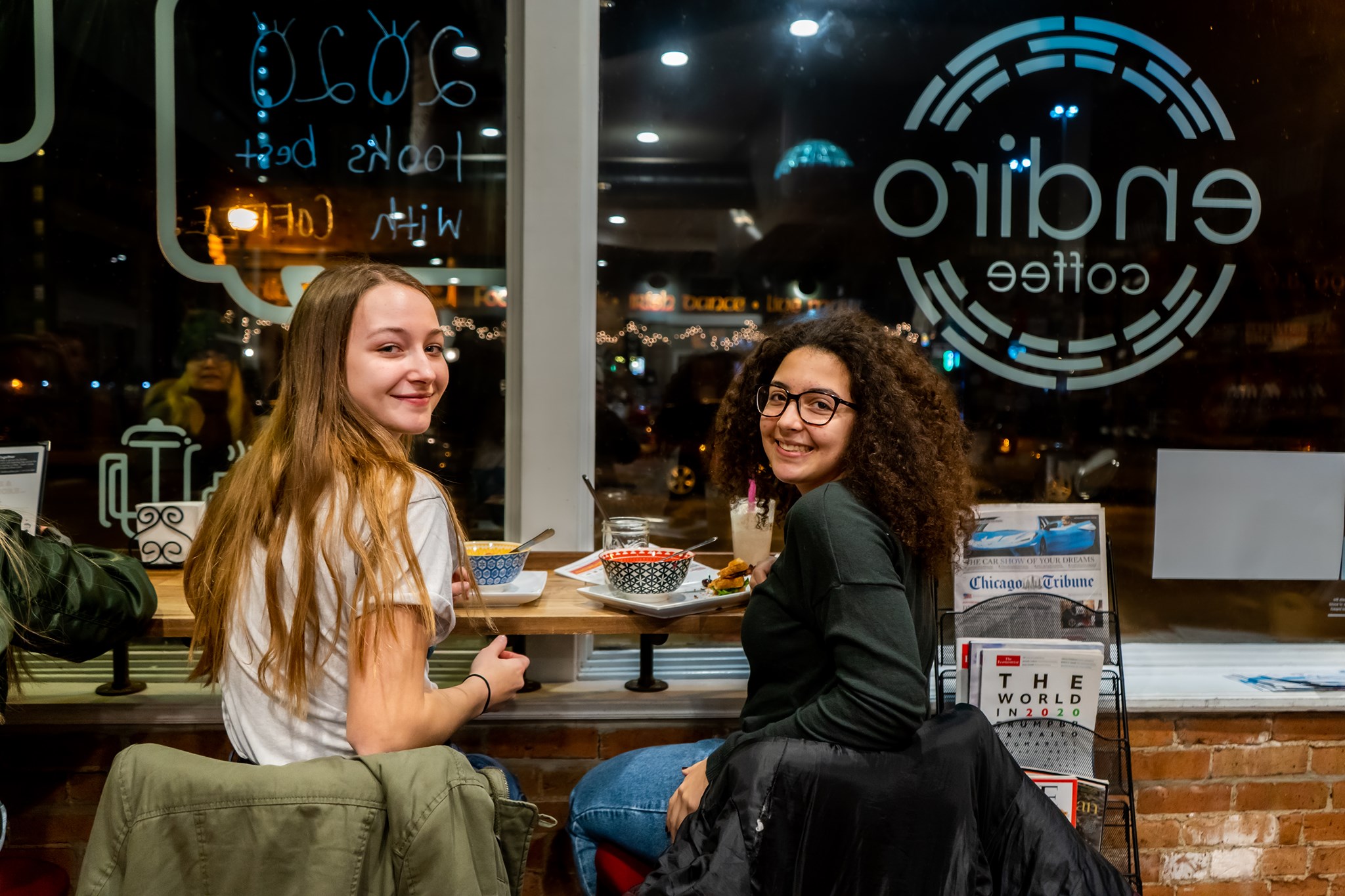 “Their signature blend is deep and rich dark roast sourced from their own women-led coffee co-op in Uganda. Their mission and corporate structure is amazing, and they’ve cultivated a great community here in downtown Aurora.”

“Great people and a great product. We’re fun, welcoming, and we’re proud of what we do here. We have phenomenal baristas and Two Brothers Coffee is outstanding.” 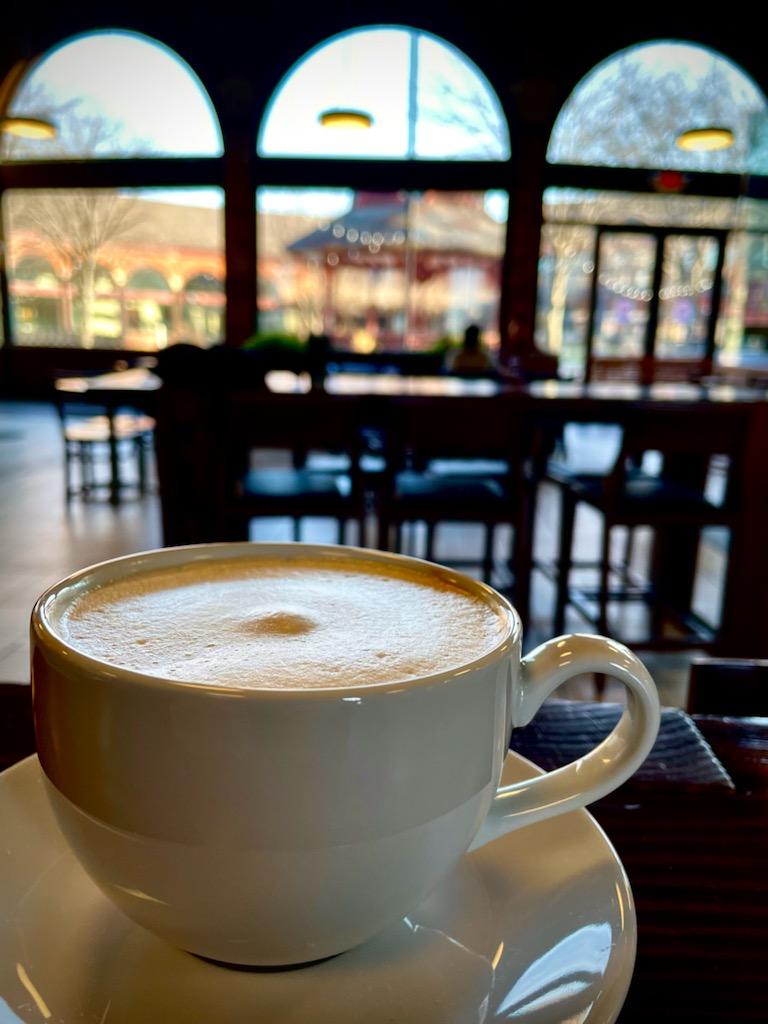 For a great coffee or dessert in the Aurora Area, visit our listings at enjoyaurora.com/Coffee.

Pair your night out in the Aurora Area with our Dinner & a Show dining guide.